Youth Struggling with Homelessness Have Varied Experiences of the Pandemic 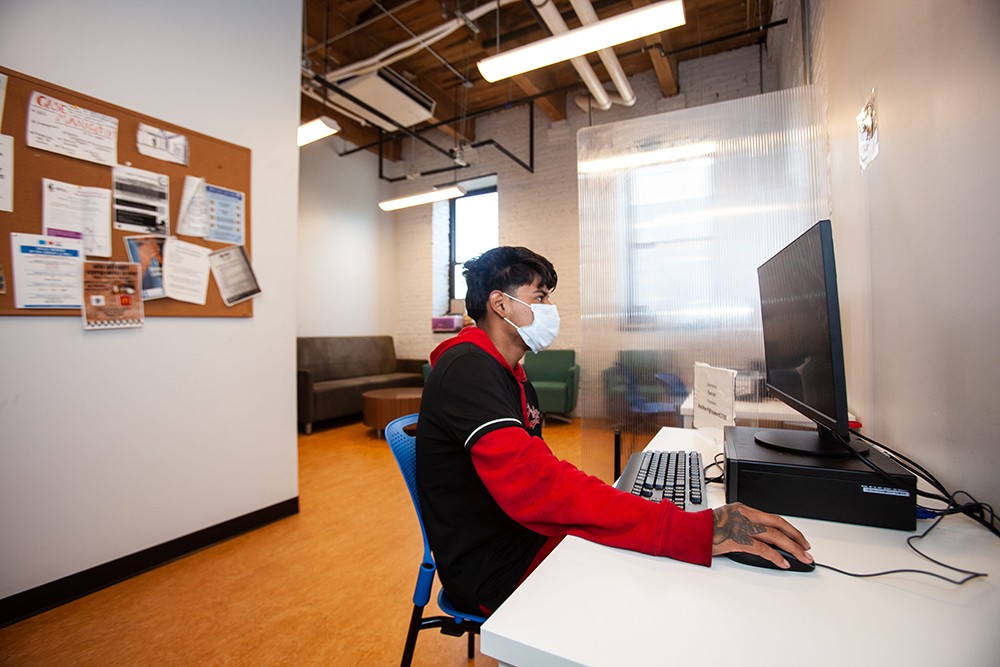 College and high school students served by The Night Ministry adjusted to online learning during the COVID-19 pandemic, as students around the world did.

Young people served by The Night Ministry have faced a variety of disruptions and challenges during the COVID-19 pandemic. According to interviews conducted with several clients of the organization's Youth Programs, their experiences of the changes, adversities, and opportunities brought by the pandemic, while sharing some commonalities, have also been diverse.

The Night Ministry's Learning & Impact Department spoke to residents of the agency's Youth Housing Programs to better understand how young people navigated the pandemic during their stays in the organization's shelters. Here are some insights and observations from those conversations.

With the pandemic necessitating wider implementation of telehealth, The Night Ministry's Youth Housing Programs connected residents to virtual appointments with physicians and therapists. Residents interviewed for the survey largely agreed that engaging with mental health services remotely was convenient because they did not have to travel to an office for appointments.

"It was maybe easier during the pandemic," said a resident of the Interim Housing Program, which provides short-term shelter for young adults, of his appointments with a psychiatrist conducted over the phone. "I was on the West Side, and they're all the way up north."

However, most young people noted they would prefer to resume seeing their provider in person when that becomes possible. And some described having difficulties with the telehealth experience.

"I would usually be on Zoom and to be honest, that would be kind of distracting," said one resident of The Night Ministry's STEPS Transitional Living Program, which provides two years of supportive shelter. "I would get distracted with other things or my housemates. And it would interfere with my therapy session."

Another resident of the STEPS Transitional Living Program said a remote appointment with a physician did not give her the opportunity to accurately relay her health concerns.

"I couldn't really explain to the doctor the areas that were really affecting me or hurting me," she said. "Sometimes it is hard when you can't physically show them what's hurting. I'm afraid I might explain things that aren't necessarily what's really affecting me."

Residents of The Night Ministry's Youth Programs who were enrolled in school had to adjust to remote education just as students around the world did. And while online learning offers some advantages, many young people reported struggling with the virtual education environment. As a result, several stopped taking classes or enrolled in alternative programs.

One Interim resident found his college did not offer enough supports for his needs. "I'm a high school graduate but I dropped out of college because I was in special ed[ucation], and I felt like the needs that I need, they were not gonna be helping me," he said.

Others missed the in-person interaction of the physical classroom and expressed frustration with being on a screen for hours at a time. "It was kind of hard for me to focus because I learn way better in person than over online," said one young person.

Another resident, however, appreciated the fact that she could revisit classes because they were recorded. "The teacher records the class that way I can go back and watch it over again. That way I can understand better," she said.

A resident of Phoenix Hall, The Night Ministry's housing program for high school students, opted out of a full day of online instruction by enrolling in a program that only required two hours of virtual classes a day, followed by independent study. The program also provided a mentor who checked in with the student daily.

While there is no proven causal relationship, months away from in-person learning did coincide with a drop in the percentage of students at Phoenix Hall who maintained or improved their GPA. Phoenix Hall residents did, however, express appreciation for the support and structure provided by the program's staff around schoolwork. 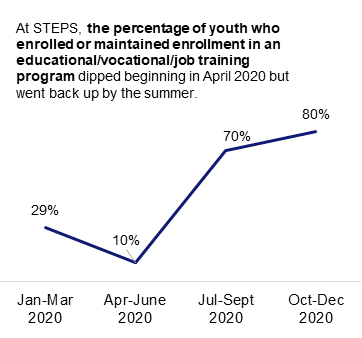 Despite the challenges of the year, all four of the high school seniors who resided at Phoenix Hall during the 2020-21 school year graduated this past June. And at STEPS, while the percentage of residents who were enrolled in an educational, vocational, or job training program was down significantly in the spring of 2020, by the end of the year it was up to 80%.

According to statistics from the Bureau of Labor, the unemployment rate among youth ages 16 to 24 skyrocketed to nearly 25% in April of 2020, although it dropped to 10% by this past May. Likewise, youth in The Night Ministry's programs reported challenges with securing and keeping employment during the pandemic, including submitting applications without receiving any word back.

Several residents were linked with job opportunities, often through connections provided by staff. As demonstrated by the chart below, at STEPS, the percentage of residents who either increased or maintained their income through work dipped in April of 2020 but began a steady increase by mid-summer of the same year. 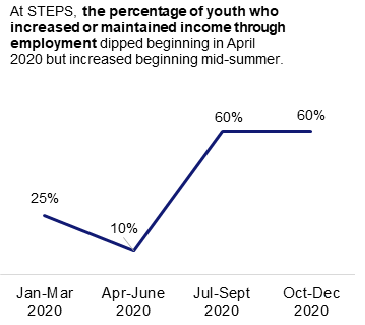 Those who did find a job reported that many of their peers were still struggling. "I feel like in the other shelter I was in, people lost their job because they weren't getting enough hours, or they quit, or they were just being cut and they couldn't do anything with it," one resident said.

Many young people served by The Night Ministry rely on public benefits such as food aid, Medicaid, and financial assistance to meet some of their basic needs. But multiple government offices were either closed or operated with reduced hours during the pandemic, resulting in longer wait times for approval and difficulties obtaining the required documents for the application process, such as a Social Security card.

One Interim resident waited four months before receiving food benefits, commonly known as SNAP. Meanwhile, at STEPS, where residents are responsible for acquiring their own food, one young person repeatedly applied for SNAP over the course of three months with no success. It was not until he was connected with someone whom his STEPS case manager knew at the benefits office that this young person received his food benefits.

Because other STEPS residents were also struggling to obtain food on their own during the pandemic because of a loss of income or inability to access benefits, the program provided boxes of food for residents beginning in May 2020. Several residents took advantage of the offer and received meat, dairy, and non-perishables to tide them over until their situation changed.