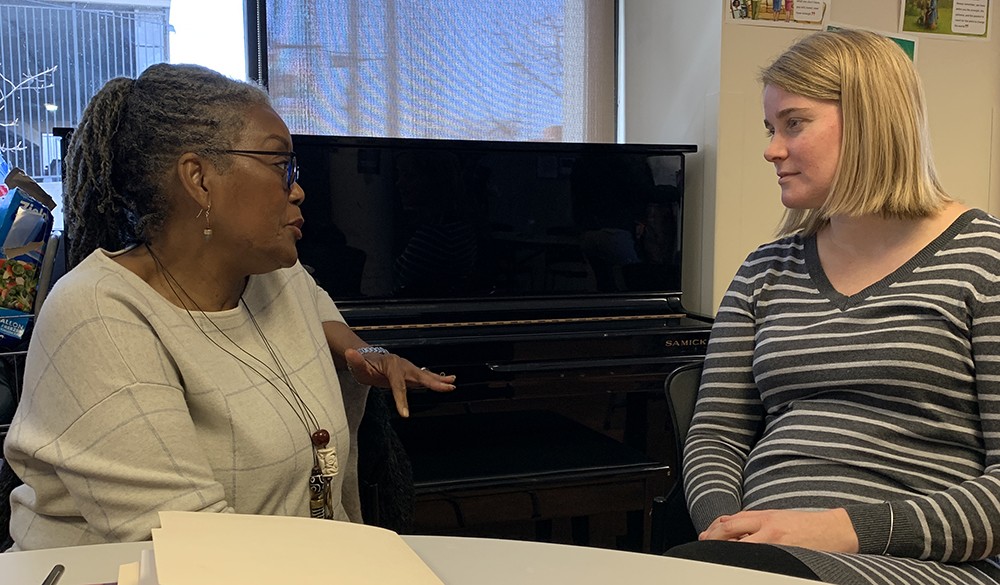 The Night Ministry's Community Engagement Manager, Jenny Merritt (right), speaks with Tracie Worthy, Vice President of I AM ABLE Center for Family Development, during a meeting of TR4IM.

Human connection is an essential part of The Night Ministry's mission. And while it's often spoken about in terms of how the agency works with those whom it serves, it extends to communities as well. That means building and sustaining relationships with residents, businesses, and leaders in the neighborhoods in which it operates.

Over the past few years, The Night Ministry expanded into the North Lawndale neighborhood with Phoenix Hall, our residence for high school students experiencing housing instability, and brought the Health Outreach Bus to Rogers Park. The agency is currently in the midst of relocating The Crib overnight shelter, Health Outreach Program, and its Central Administration into a rehabbed facility in the Bucktown neighborhood.

According to Community Engagement Manager, Jenny Merritt, the process of connecting to a new community usually begins with elected officials.

"The alderman can provide guidance about which community groups we should speak with to educate about our mission and our plans," she said.
That initial contact with an alderman is followed by attendance at meetings of community groups such as block clubs, sitting down with other nonprofits active in the neighborhood, and door-knocking.
Jeannette Srivastava met Merritt during The Night Ministry's initial outreach in the Bucktown neighborhood, where Srivastava lives. She was impressed by how genuine the agency's approach was.
"It didn't feel like a PR campaign," she said. "In public meetings, Paul Hamann (The Night Ministry's President & CEO) did a great job answering the questions that he could and writing down those he couldn't and saying, 'We'll get back to you.'"
The relationship with neighbors is sustained and nurtured even after The Night Ministry moves in. In North Lawndale, for example, Merritt attends meetings of TR4IM, a network of community groups and leaders on Chicago's West Side devoted to reducing the effects of childhood trauma and violence. She and her colleagues are regulars at community meetings in other neighborhoods as well.
"People appreciate that we show up consistently. In the Lakeview neighborhood, for example, people will tell us that we are one of the only nonprofits that is always in attendance at meetings, and they like that we're here not to just respond to a specific issue, but we're here because we are part of the community," she said.
Tweet
Looking Forward with Hope: A Fiscal New Year's Ref...
Health Outreach Program Offers Services on Mass Tr...