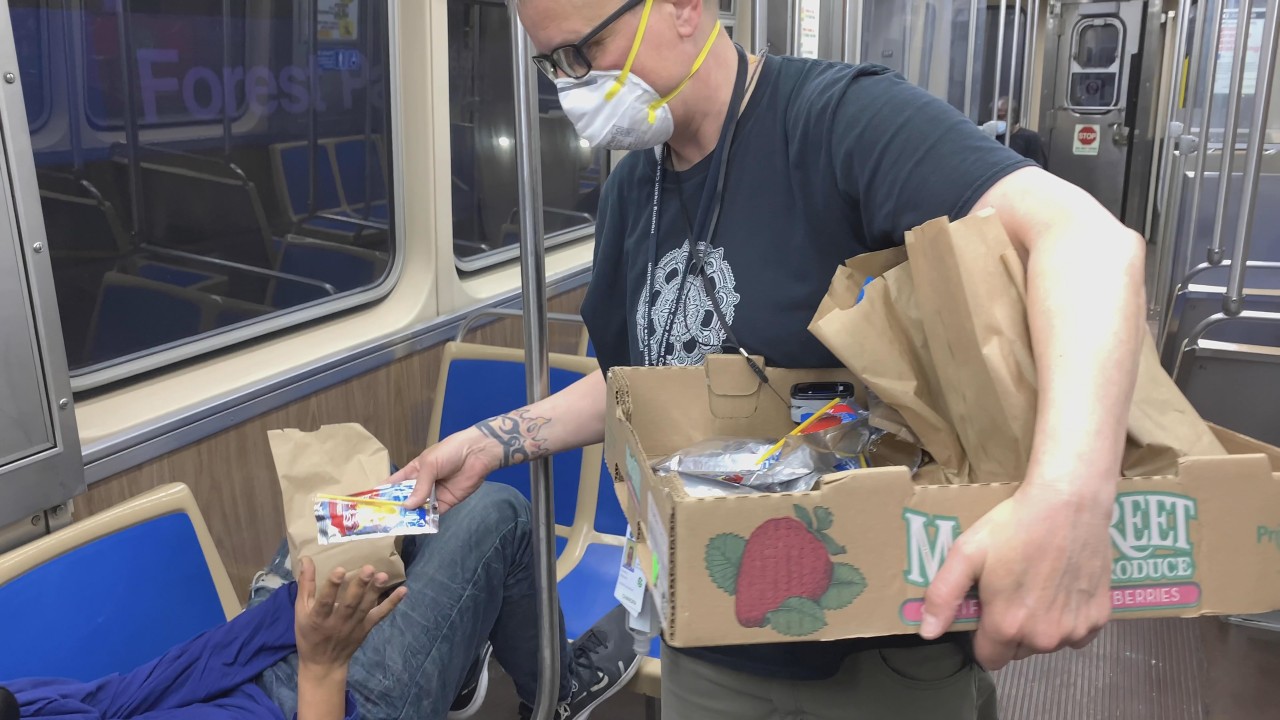 Nurse Practitioner Chandra Matteson hands out food and beverages while inquiring about a client's well being on a CTA Blue Line car at the Forest Park Blue stop.

For the past several weeks, staff with The Night Ministry's Outreach & Health Ministry (OHM) Program have been hitting the rails to reach individuals struggling with homelessness.

During the winter, Peer Advocate Professional, Keith Belton, suggested to his colleagues on the Street Medicine Team that they try conducting outreach on the CTA. Because many Chicagoans experiencing homelessness ride public transit overnight, particularly during the winter, Belton believed the team, which brings free health care, food, and survival supplies directly to clients, would encounter many individuals in need of services.

Belton was more than right, according to Stephan Koruba, Senior Nurse Practitioner at The Night Ministry.

"We started by riding the Red Line down to the Loop and then taking the Blue Line out to either O'Hare or out to Forest Park and then back again," Koruba said. "And during the overnight hours we were encountering hundreds of people on those trips."

After a few initial rides, Street Medicine decided to incorporate the CTA's Red and Blue Lines into their weekly outreach schedule. It was at the same time, Koruba said, that the COVID-19 pandemic struck, driving more people from shelters onto the trains.

"Some left shelters because they felt there was a high chance of contracting the coronavirus, but also some shelters moved people out in an effort to implement social distancing guidelines," he said. "They moved out the youngest and healthiest, the lowest risk population." 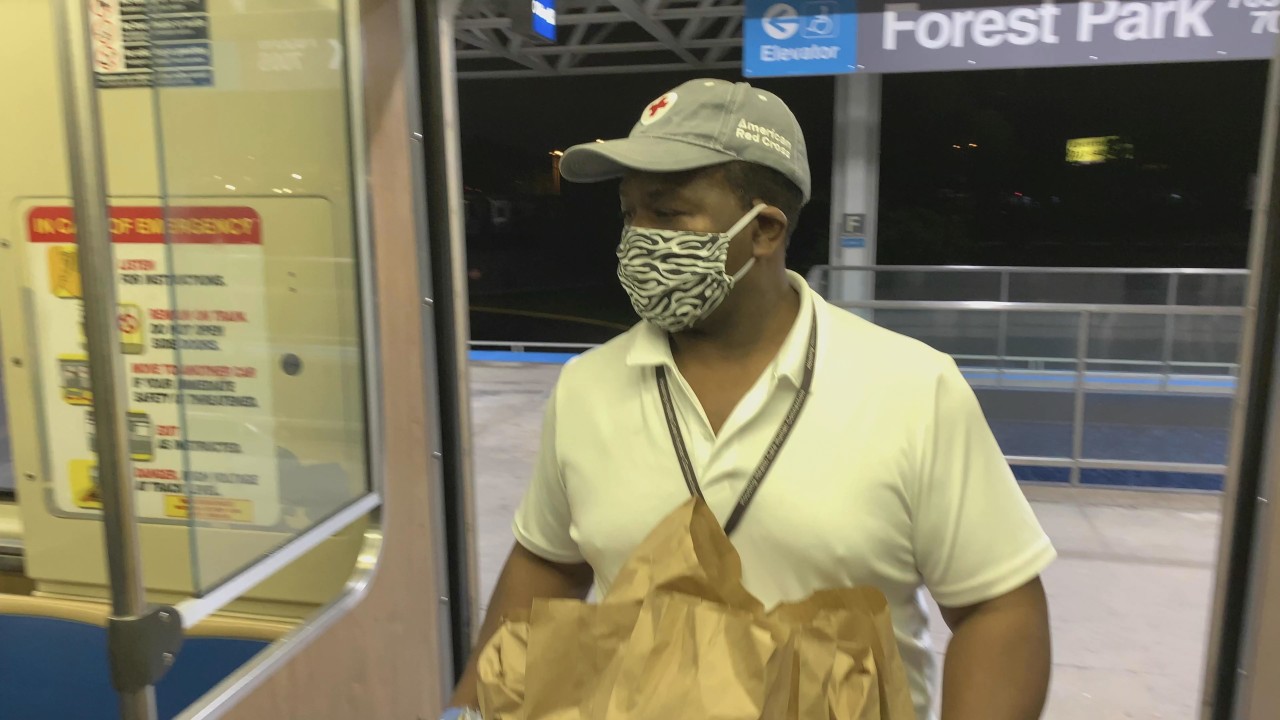 Health Outreach Bus Driver Sylvester Farmer took time off from the Bus to help with outreach on the CTA.

At first, team members provided services on the trains while they were in transit, but soon decided it was better to offer services from the platforms.

"When we were riding in the train, it was really loud, and we had face masks on, so people couldn't hear us. The walk from train car to train car was difficult. And it was riskier for our team to be in an enclosed area due to the coronavirus," Koruba said.

The team settled on the 95th Street Red Line station and the Forest Park Blue Line station as the stops where they could make the most impact. Each stop is at a terminus of their respective lines and has only one platform, maximizing the chances they would meet clients as they switched cars. Meanwhile, OHM staff who normally work on the Health Outreach Bus came on board to help with the CTA outreach.

"We have had an outreach worker and a nurse practitioner at each stop, providing COVID-19 and health screenings as well as handing out food and beverages. Each of the two teams every Wednesday night was encountering over a hundred people in the three hours or so we are doing outreach," Koruba said. "The CTA folks got used to having us there, and clients started to expect us and started to rely on us." 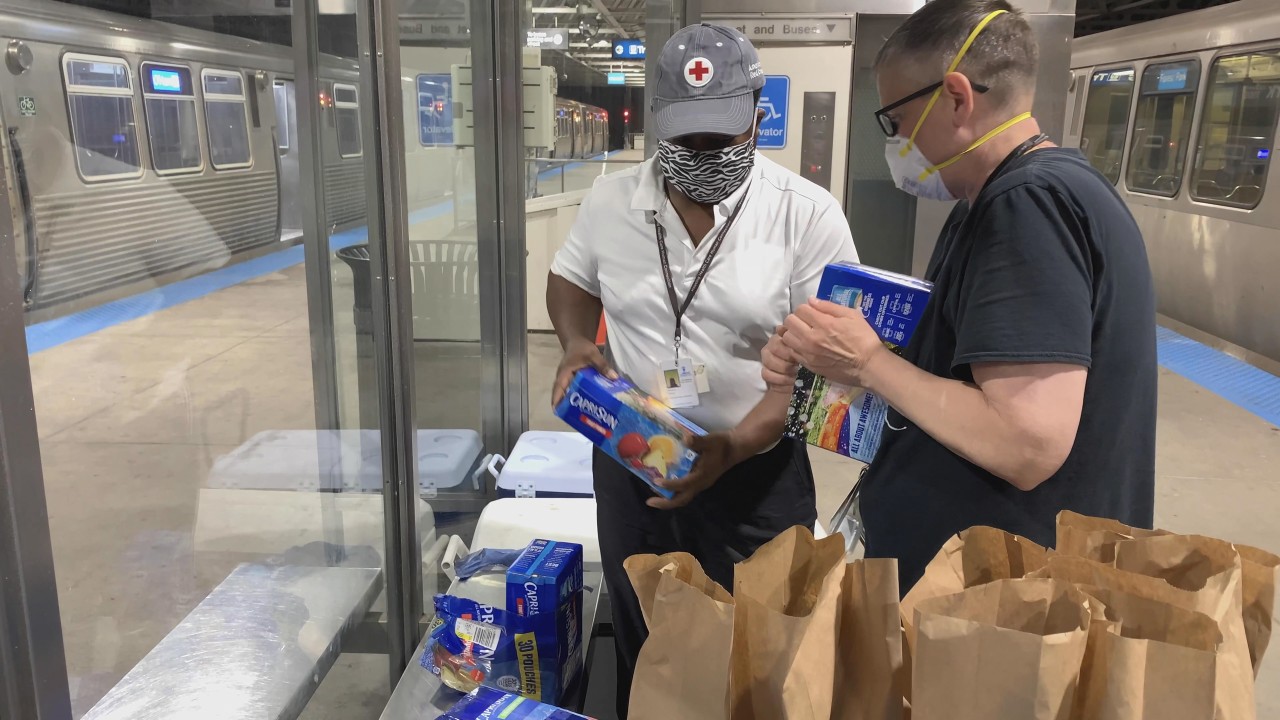 Farmer and Matteson unpack beverages and game plan for their night's outreach at the Forest Park Blue Line stop.

With summer temperatures settling in, OHM wrapped up its CTA outreach for the season this past Wednesday but plans to restart in the fall, when the weather turns colder. The Night Ministry's Youth Outreach Team, which connects with young people living on the streets and had joined OHM at the CTA some nights, will continue to conduct its own outreach on mass transit over the summer.

"I'm going to ask each of the other street medicine teams to take on one night a week. Then we can maybe have a team on those different platforms offering medical and outreach services multiple nights a week," he said.

Tweet
The Night Ministry Is a Good Neighbor in the Commu...
New Board Chair Values Strong Relationships and Di...