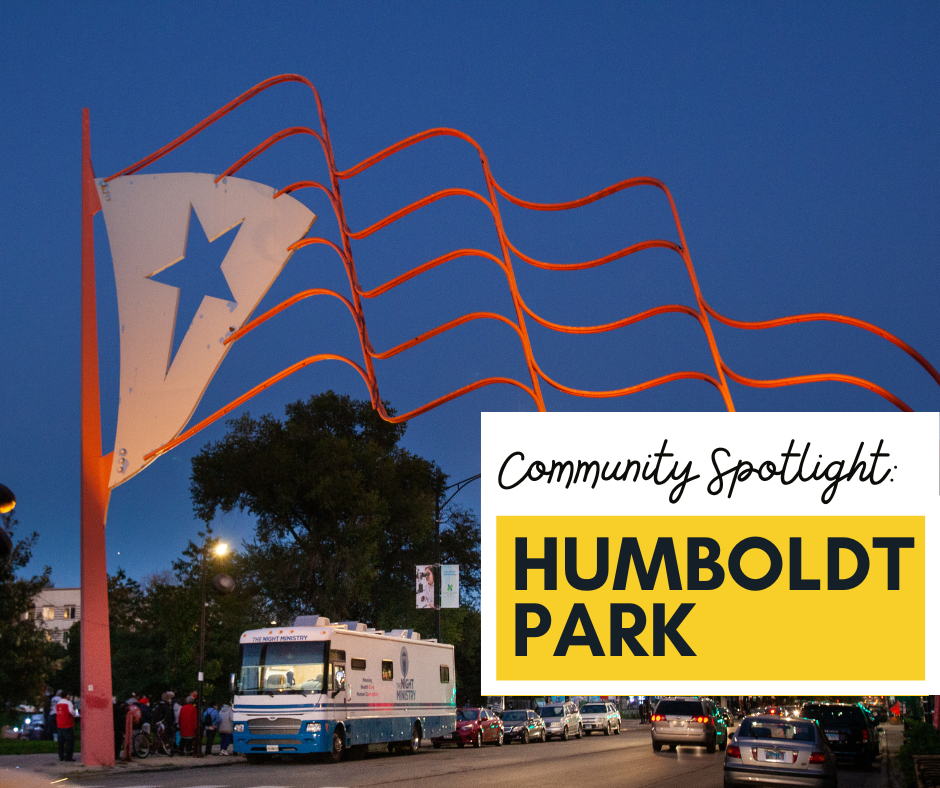 Known for its lush, spacious park and its tight knit Puerto Rican community, Humboldt Park is a beloved green space and a culturally rich neighborhood. But its attractions haven't kept challenges at bay – and in recent years, they've led to a wave of gentrification that's displacing longtime residents.

In this article, the third in our series highlighting communities we're active in across the city, we'll focus on how the neighborhood's past struggles have shaped its character and highlight a few major concerns it faces in the present.

Though well-known today as Chicago's hub of Puerto Rican culture, early 20th century residents of Humboldt Park hailed from Jewish, Polish, German, and Italian-American communities. Puerto Ricans had gained the right to U.S. citizenship in 1917, but immigration did not pick up until midcentury. Many originally settled in Lincoln Park, and when the neighborhood gentrified, they resettled in Humboldt Park as the neighborhood's non-Hispanic white residents moved elsewhere.

"They started moving out. Not that we displaced them - we don't have the power to displace anyone - but I don't think they were comfortable living with us," said Zenaida Lopez, Associate Coordinator for the El Rescate Transitional Living Program, which offers identity-affirming housing for LGBTQ and/or HIV-positive young people.

The growing Puerto Rican community did not have it easy. They faced limited educational opportunities, as well as housing and employment discrimination. A largely non-Hispanic white police force patrolled the neighborhood, and police brutality and corruption were commonplace.

"This was a community where about 85% of the people were Spanish-speaking – mostly Puerto Ricans – and the police were usually white. The relationship between them and the cops was really bad," said Carmen Flores-Rance, Church Council President of Humboldt Park's Iglesia Unida de Cristo San Lucas, a local religious organization focused on social justice. "There was a lot of fighting around here. They just didn't get along."

In 1966, tensions erupted. Cruz Arcelis, a young Puerto Rican man, was shot by police officer Thomas Munyon at Division Street and Damen Avenue, sparking the first Puerto Rican riot in the U.S – leading to three days of turbulence including looting and mistreatment of residents by the police.

But the trauma of the riot succeeded in bringing the community together. Organizations and groups formed to address local concerns and find ways to meet neighborhood needs like increased access to health services, education, employment, improved housing, and policing. The Puerto Rican Cultural Center, Lopez shared, aided Puerto Rican residents in accessing necessities and strengthening a sense of community.

"Out of all of that we were able to start working on getting better housing, and out of that I believe came for us the opportunity to have bilingual education, and to be able to allow people to learn to deal with us in a positive way," said Lopez.

Even neighborhood churches got involved, including Flores-Rance's Iglesia Unida de Cristo San Lucas, which fought to bring more Hispanic and Latinx cops onto the force to decrease the violence inflicted on residents. Its founder, Reverend Jorge Morales, was himself a victim of police brutality. "This church was very instrumental in hiring more Latino cops and fought along with some other organizations," she said. "I think the relationship has gotten better because now you see more Spanish-speaking, Latino, and Black cops."

Though many aspects of life in Humboldt Park have improved thanks to community activism, a new concern has sprouted: gentrification. The beauty and accessibility of the neighborhood is attracting a wealthier and whiter non-Hispanic population as developers are buying up and remodeling local properties. The upheaval is already well under way, and many are being forced out of the neighborhood for lack of access to affordable housing. And some are landing in encampments.

"The neighborhood is changing, so the poor are being pushed out and they're being replaced with condos, and high rent, and businesses. What can I say?" said Flores-Rance. "There's no jobs. There's the housing situation. You know, it's very hard to get low-income housing around here, and before people could live here."

Homelessness is a growing concern, and many tents now populate the park, a sight not seen in years past. Several are located directly in front of Iglesia Unida de Cristo San Lucas, which faces the park and provides many services for unhoused community members, a large number of whom are young.

"I've been living here close to 10 years and to see young people living in tents - it's sad to see what's going on," said Rance-Flores.

But the Puerto Rican community of Humboldt Park continues to take pride in and fight to hold onto the neighborhood. "This is a pretty community. It's beautiful. We got the 606 trail now, we have the park, the lagoon, the boathouse. In the summertime there's beautiful jazz music and there's a lot of events going on," she continued. It's a place worth fighting for.
Tweet
pinterest
Local Baker Sells Sweets to Support The Night Mini...
Reap the Rewards
Donate Now
Sign Up for Our E-Newsletter