Barbara Bolsen Looks Back on Two Decades with The Night Ministry 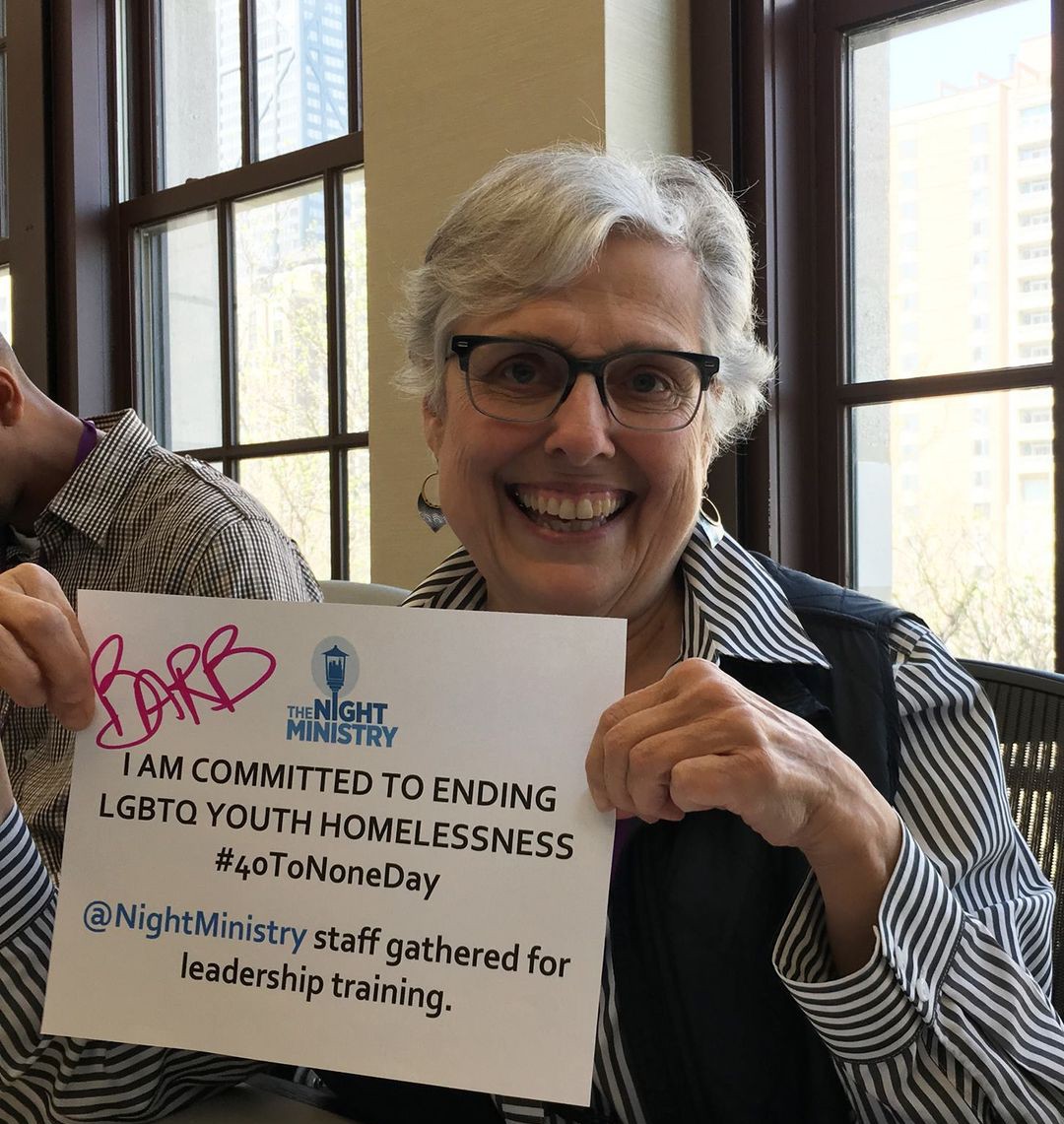 Barbara Bolsen, The Night Ministry's Vice President of Strategic Partnerships and Community Engagement, is retiring after more than 20 years at the agency.

This month, The Night Ministry says goodbye to a beloved and long-serving leader and colleague. After more than two decades at the agency, Barbara Bolsen, our Vice President of Strategic Partnerships and Community Engagement, is retiring.

Bolsen leaves behind a legacy of service, compassion, and innovation at The Night Ministry, all aimed toward the improvement of the lives of Chicagoans experiencing poverty, homelessness, and loneliness.

The following story comes from an interview conducted with Bolsen as she looked back at her years with The Night Ministry.

Bolsen came to The Night Ministry after a twenty-year-plus career in journalism, including a tenure as the editor of the newspaper for physicians published by the American Medical Association. But something was missing for her in the profession.

"I kept telling people that my work was all from the neck up, that it was head work," she said. "And I wanted to do work that would engage my heart as well as my head."

Bolsen wasn't sure what would allow her to do that, but with encouragement from the pastor and friends at a church she attended, she came to the conclusion that attending seminary would help her find the right path.

"I could go and study, and I didn't have to think of myself as preparing for any specific career. I could figure it out as I went along," she said.

It was during seminary that Bolsen came into the orbit of The Night Ministry. She'd known the Rev. Tom Behrens, the nonprofit's Founding President & Former CEO, through her church and had gotten together with him for an informational interview.

"I wanted work that would be in sync with my values," Bolsen said. "So, I kept in touch because I decided that The Night Ministry was a place where I could do that."

"I started on December 17, 1997." she said. "I was based at the Open Door Shelter - Lakeview, which was our only shelter at the time. My job was to be an unofficial chaplain in the shelter and then do street outreach."

Outreach at The Night Ministry looked a bit different in the 1990s. Although the Health Outreach Bus program was up and running, walking the streets was still part of outreach work. And that's what Bolsen did in Lakeview, helping young people she encountered on sidewalks, parking lots, and in hangouts such as the hot dog joint that used to occupy the corner of Belmont and Sheffield.

One day, during her first winter with The Night Ministry, she was approached by an individual who was part of a group of people who stayed under the El tracks.

"He came up to me and said, 'Everybody wants to know who you are. We see you walking around the neighborhood. Some people think you're a cop,'" she said.

"When I walked around the neighborhood, I wore a clergy collar. And so, I said, 'No, I'm not a cop. I'm a pastor. That's why I'm wearing this collar.'"

"Then I explained to him who I was and what I was doing," she said. "And after that, people started approaching me on the streets."

Helping to launch Beat the Heat, the precursor to the weekly outreach event The Night Ministry's Youth Outreach Team holds in Lakeview, also cemented her relationship with the neighborhood.

"We'd set up on a Friday night on Belmont, and sometimes we grilled hot dogs. By the year 2000, we were there pretty regularly. That's when I really managed to become embedded in the life of the street and really get to know people," Bolsen said.

Bolsen touched the lives of countless young people at The Night Ministry while working in the Lakeview shelter and on the streets. She learned that most of those relationships are temporary, even if the impact is lifelong.

"We are there for people in their time of need," she said. "We are there to provide support and shelter, and family support when that's not available to them. But we aren't always going to know what happens with the young people that we care for, and that's okay."

Making An Impact on the Wider Community

Bolsen worked her way up from youth outreach worker to Director of Outreach & Health Ministry and then later to Director of Programs and finally, Vice President. All the while, she has advocated on behalf of communities The Night Ministry serves and helped bring about concrete actions to address challenges they faced.

She served on a community-based hate crimes task force with the Lakeview Action Coalition (now ONE Northside) that brought about late-night bicycle patrols by the police in the neighborhood.

"Lakeview had the highest number of hate crimes in the city. They were anti-gay, anti-Jewish, and race-based. It was powerful to be involved with a group of people who wanted to address this issue of hate crimes, and to argue and negotiate with and pressure the police department until they gave us what we asked for," she said.

A short time later, the task force turned its attention to police misconduct against young gay and transgender individuals and youth of color.

"It was an unbelievable wake-up call for me personally," she said about hearing stories from young people who had been harassed and traumatized by police.

Bolsen said the task force itself ultimately achieved mixed results in working with the police on this issue, but it did lead to the formation of a much larger organization that is still pushing for police reform today.

"ONE Northside joined with a dozen other community organizing groups, citywide, to form the Grassroots Alliance for Police Accountability, GAPA, which now has an ordinance in City Council," she said.

Bolsen has played a major role in years of innovation and expansion at The Night Ministry, a process she sees as occurring organically.

"Growth has almost always been because of needs that we have identified, either through our experience in delivering services or that we've recognized through speaking with our clients," she said.

Bolsen was very involved in the development of The Crib, The Night Ministry's overnight shelter for young adults. The program, which opened in 2011, is designed to address the immediate survival needs of young people experiencing homelessness who are not adequately served by overnight shelters for older adults.

"I think the program that in some ways became really close to my heart was The Crib, and possibly that's because I started as a youth outreach worker, and I remained specially connected to that part of The Night Ministry," she said.

The last major project Bolsen spearheaded was the relocation of The Night Ministry's headquarters and The Crib to 1735 North Ashland in Bucktown, which the agency completed this past summer. The Crib, which had operated in the basement of Lake View Lutheran Church for nearly ten years, now occupies the first floor of The Night Ministry's headquarters and features multiple private shower rooms, a dedicated dorm room with beds, a commercial grade kitchen, and a lounge, among many improvements for the young people it serves.

"Being in the position to help develop the new space for The Crib was sort of like coming full circle," she said. "I feel really gratified about that. It makes me really happy."

Bolsen's impact on The Night Ministry can be seen in programs such as The Crib and Street Medicine, which brings free health care, survival skills, and supportive services directly to encampments across Chicago.

"Street Medicine was a dream," she said. "But I was not the person to bring it to fruition. I was so glad that Erin (Ryan, The Night Ministry's Senior Vice President) came because she had the right skill set to make it happen. I am really, really proud that The Night Ministry has that program."

But her impact will also be felt for years to come in the culture of the agency. Bolsen has served as a mentor to The Night Ministry's younger leaders who now carry the torch.

"I have a passion for the people that we serve, and to me passing down The Night Ministry values --- who we are and who we can be --- is really important in making sure we continue to serve them."

Tweet
The Night Ministry Opposes Change to Shelter Equal...
Get to Know The Associate Board Executive Committe...